I started to pick up drawing again. Before I became a journalist, I always wanted to be an artist. I love art. I get lost in it for hours, the way I should be able to get lost in every aspect of life. 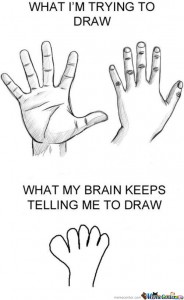 The first rule to drawing  is to draw what you see, not what you think you see. For example, when you draw something you may wonder why it doesn’t look exactly like the object you are trying to draw. You may attribute it to not being an artist (which you may not be) but the reason something may come out looking more like a cartoon or misshaped is because you are drawing what you think you see, not what you really see.

So what is drawing what you actually see? Has your common sense been fooled this entire time? Basically, yes.  Illusions of the eyes have been studied for centuries. To define the concept better of what you “think you see” take a look at the image below. 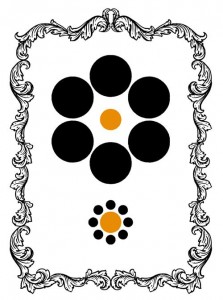 Which orange circle is bigger? Did you say the one on the bottom? Actually, both circles are the same exact size . This image is referred to as the Ebbinghaus illusion, meaning our brain will perceive a shape in relation to it’s surroundings and as you can “see” our brains can easily be manipulated. [Source] 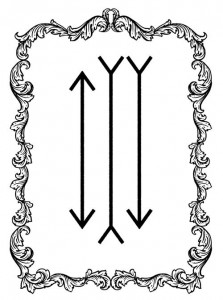 Or what about this image to the right? Which line is longer? Similarly to the photo listed above the arrows in this drawing are tricking your brain to believe that some lines are closer than others. Your brain does this because the arrows trick your mind into trying to perceive the image as 3D. Now, your brain over compensates the image and tricks you into believing some lines are further away than others thus making some lines look longer. [Source]

Why does this happen? Researchers believe that our mind takes shortcuts. There is so much visual information that our brain cannot process it fast enough so it actually chooses the most likely outcome… which clearly is often incorrect.  And that got me thinking. Life is exactly like that.

How many times do we get upset about how other people treat us? What people say or don’t say? If our perception could be tricked so easily by images around us, imagine what other things we can be “seeing” that aren’t really there. Just like our drawings, our mind will take an idea and run with it. That idea often is untrue. As I always joke the best way to make someone  jealous is to not post anything on social media because whatever they think I’m doing is probably way better than what I actually am.

And this is where drawing comes back into play. An artist knows that we think we see different objects than what is actually there. They do not draw what they think they see, they look objectively and draw what is really there.  An artist dissects the object and draws it line by line, rather than the object as a whole. And that concept is how we should handle life as well. We must not see what we think we see. We need to take a step back from stressful situations and like the artist look at what is really there. Dissect what is actually going on and you will find out things are often not as bad as they seemed. You just did what the mind does, saved time by filling in gaps with whatever you feel is most likely the outcome. But remember, things are not always they way you think they are. In fact, they are often better.