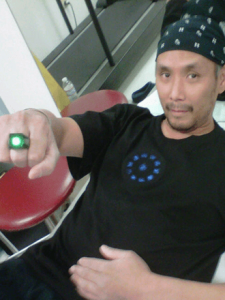 Ed Reyes (Pictured) says that thinking of super heroes is what helped him through all of his struggles.

While he was being treated for his poor health it took a severe tool on his body. Ultimately Ed was unable to work and he ended up homeless— too ashamed to reach out for help.

“The day I was told I had Cancer devastated me, my family as well as my fiancé Lalaine. I knew I did not want to be a burden for them,”   Reyes explained. ”What made my recovery difficult was that having these existing conditions on top of my Hodgkin’s Lymphoma, [meant] my road to recovery was going to be long and difficult and painful,” he added.

September 9, 2009, Ed was given six months to live. His only hope was a Stem Cell transplant at  City Of Hope.

Ed said that his will to survive was for his family, “My younger brother was murdered at the young age of 21. When I got the news that I had 6 months to live, I could either accept my outcome or fight. I could not let my mom lose another son, so I fought.”

On January 13, 2010 Ed was finally able to get the stem cell treatment and after passing the five year mark two years ago, he’s no longer considered in remission, but cured.

“My body started to regenerate all new skin cells. My Lupus butterfly rash, Plaque Psoriasis that covered 40% of my body, my Arthritis and joint swelling gone, as well as the lymphoma was gone. All my other ailments except Diabetes, which runs in the family were, non existent in my blood works. A true Miracle of Science with Soul, the result is baffled my Doctors and I have been part of their Research Program since then.”

“There were so many times of weakness and near death experiences, somehow I defied all odds, fought through the pain and came out to fight another day.”

Ed is living proof that inside all of us are super heroes and that no matter what the obstacle is, we can get through it.

How You Can Help

Now Ed is giving back to the charity, Leukemia & Lymphoma Society that saved him and you can help too.

Reyes created a campaign he hopes to be similar to the ALS challenge except, no ice, no water, no bucket … just you!  Inspired by super heros, Reyes believes that anyone can be a hero for someone, so why not be one to raise awareness & money for cancer Cancer research.

I have become part of Ed’s coalition of heroes, and I challenge you join us to help raise awareness.

To find out how you can join the challenge go to: http://coalitionofheroes.com/im-a-hero-be-a-hero/

And don’t forget to donate at http://coalitionofheroes.com/join-the-coalition/

I know you want to be a superhero. Just remember within all of us is a hero. So go out there and be one! Please join the conversation by using the hashtag and share  #ImAHeroBeAHero !