I’m about to tell you what the doctors don’t.

But first let me get you up to speed to how we got here.  Earlier this year, I was suffering from debilitating acid reflux and stomach issues so I went to a gastroenterologist. During this time, I was prescribed PPI’s (acid reflux medication). They were supposed to make me better but I got worse.

On a scale of 1-10 my pain was a 12. I was dizzy, had swollen glands, joint pain, rashes, extreme fatigue, a rapid heart-rate & because I couldn’t eat from the pain I lost 15 pounds.  After researching the side effects and seeing my symptoms were every one listed, I decided to stop taking the medicine. Instantly after  the joint pain and severe side effects stopped but my stomach was getting worse. 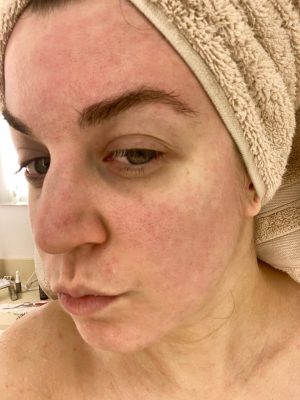 My skin rash which was accompanied by dark circles around my eyes and burning/tingling sensation.

I went see a new specialist. This time, I remembered I was using a prescribed cream that had a side effect of IBS. The stomach issues seemed to begin when I started using the cream. Could this be my cause? I asked the doctor. He said unlikely. We decided to do an endoscopy and I was diagnosed  with reflux esophagitis and  chronic gastritis. He told me that I HAD to get back on the medication if I wanted to heal & they were going to send me for further testing to see if I had IBS.

But I didn’t have a chance to get back on the medication because 3 hours after the endoscopy I had a 103 degree fever! I was hospitalized and diagnosed with pneumonia! At this point I felt so sick, I had dark circles around my eyes and had hardly eaten or slept in 5 months! After strong antibiotics, I had survived the ordeal. I was actually starting to feeling better.

I had follow up appointment with my internist and told him everything about my stomach &  the pneumonia. He reviewed my papers and told me I needed to get back on the acid reflux medicine if I wanted to heal or else I would get much worse. So, he prescribed me another PPI and I tried it out. Within one day all my symptoms were back: joint pain, swollen glands, a rash, and now a fever!

I called my doctor and he squeezed me in the next day. He told me I shouldn’t be feeling this terrible.  I questioned him. I had pneumonia six days prior and I explained how these severe symptoms seemed to only happen when I took the acid reflux medication. I also told him again how I thought the cream was causing the IBS.

He replied, “No, that’s very unlikely. I think you may have an autoimmune disease.” At this point, I was so sick that I just wanted an answer to be better. They drew my blood and told me to wait a few days for results.

One week later and I got the call. You have a positive ANA test.

An antinuclear antibody (ANA) test is used as a primary test help evaluate a person for autoimmune disorders that affect many tissues and organs throughout the body (systemic) and is most often used as one of the tests to help diagnose systemic lupus erythematosus (SLE) [Source].

And my results were not a low positive. They were a titer of 1:320 which means I tested  8 times above the norm. According to a study, 96.7 percent of the subjects tested with that high of a positive were confirmed to have an autoimmune disease. This gave me a 3.3% chance of not having one. Pretty slim. The doctor referred me rheumatologist, auto immune specialist, for further testing.

At this point I was feeling sick & depressed, wondering what I did to my body to cause it to attack itself? But what gave me hope was that ANA tests are notorious for false positives. Even though my chances were slim, there are many proven reasons for an ANA test to be a false positive such as: having an infection or some medications can elevate levels. Remember, I had felt worse every time I took my acid reflux medication.

I set up an appointment with the rheumatologist & she wrote me scripts for 30 MORE blood tests that would confirm or rule out if I had things like: Lupus, Sjorgens Syndrome & Scleredema.  I decided that I would wait two months to take these tests, up until this point I had been sick for 5 months, had pneumonia, two IVS, and a blood test once a week for the last month. I was so exhausted and weak, I couldn’t handle another needle.

So I decided during this time I would do some research. No doctors were helping me anyways.

I had a hypothesis: My stomach issues were caused by a prescribed cream I was using & the positive ANA/ severe autoimmune-like symptoms were a result of the acid reflux medication. Therefore, If I were to stop both medications the symptoms would subside.

So, I stopped both medications and begun my quest.  With a simple google search the first  article that came up confirmed my theory.

In 2016, “The Food and Drug Administration (FDA) approved an update to the prescribing information for all proton pump inhibitors (PPI), a class of acid-suppressing drugs. The update was prompted by reports of cutaneous and systemic lupus erythematosus associated with these drugs; the events have occurred in patients as both new onset and as an exacerbation of existing autoimmune disease.”

Not only did the article confirm my theory but the FDA found that the, “Onset typically occurred within days to years after starting PPI therapy,” And that , “Most patients presented with rash, arthralgia (joint pain) and cytopenia (rapid heart-rate and dizziness).” It added, “Patients who show signs or symptoms of CLE or SLE should discontinue PPI treatment and be referred to an appropriate specialist for follow up.”

Those were the EXACT symptoms I was complaining about to my doctor!

And my positive ANA test, the FDA had data for that too,”While most patients will improve within 4 to 12 weeks, serological testing may still be positive and elevated test results may take longer to resolve than clinical manifestations.”

And there it was. Scientific studies proving that I was not crazy! I discontinued all medication. Changed my diet to heal my stomach and decided to give myself two months before getting the remaining blood tests.

What do you think happened?

All of my auto-immune symptoms 100% disappeared and my stomach? It was 90% better within two months. The blood test? EVERYTHING CAME BACK NEGATIVE. Below are before and after photos of my skin and stomach. 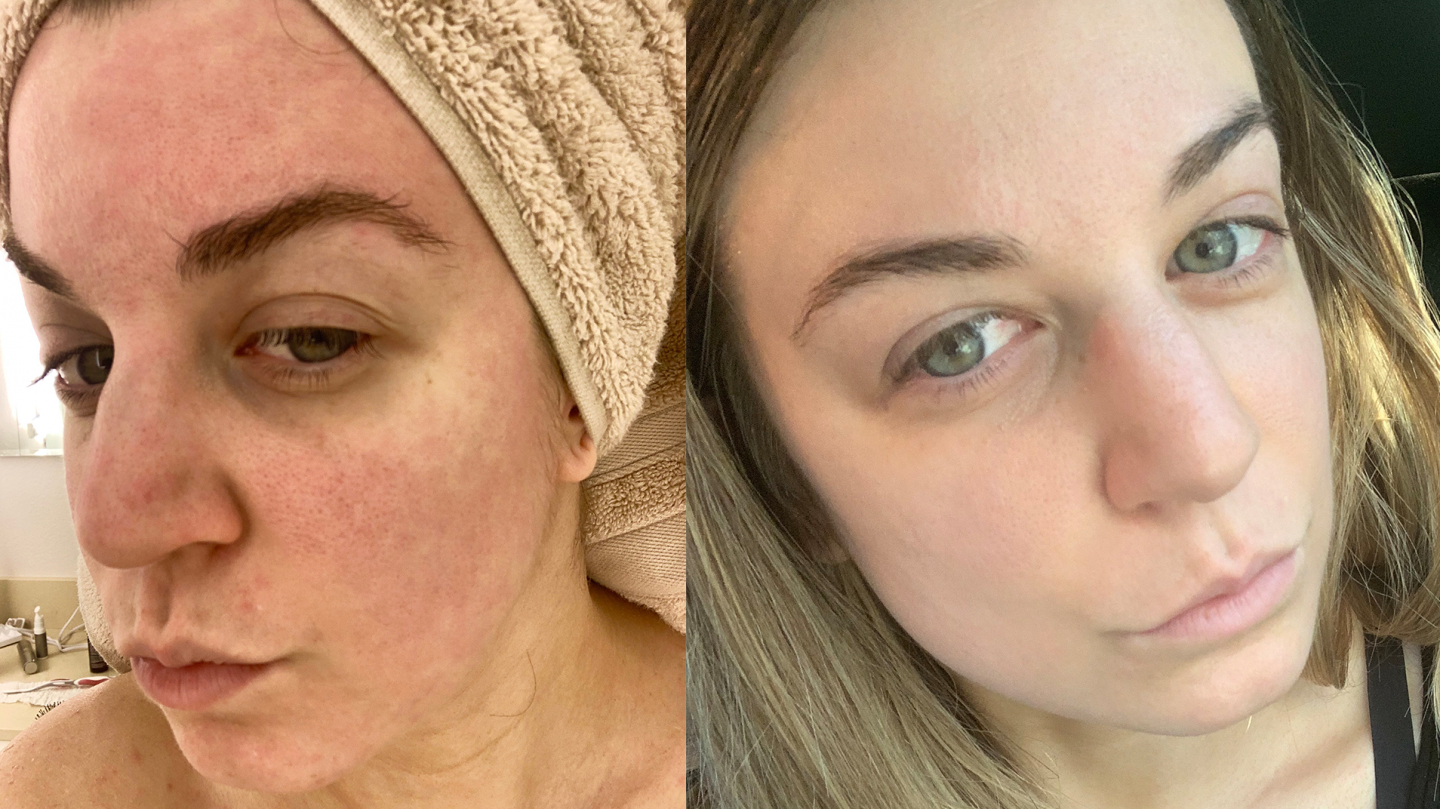 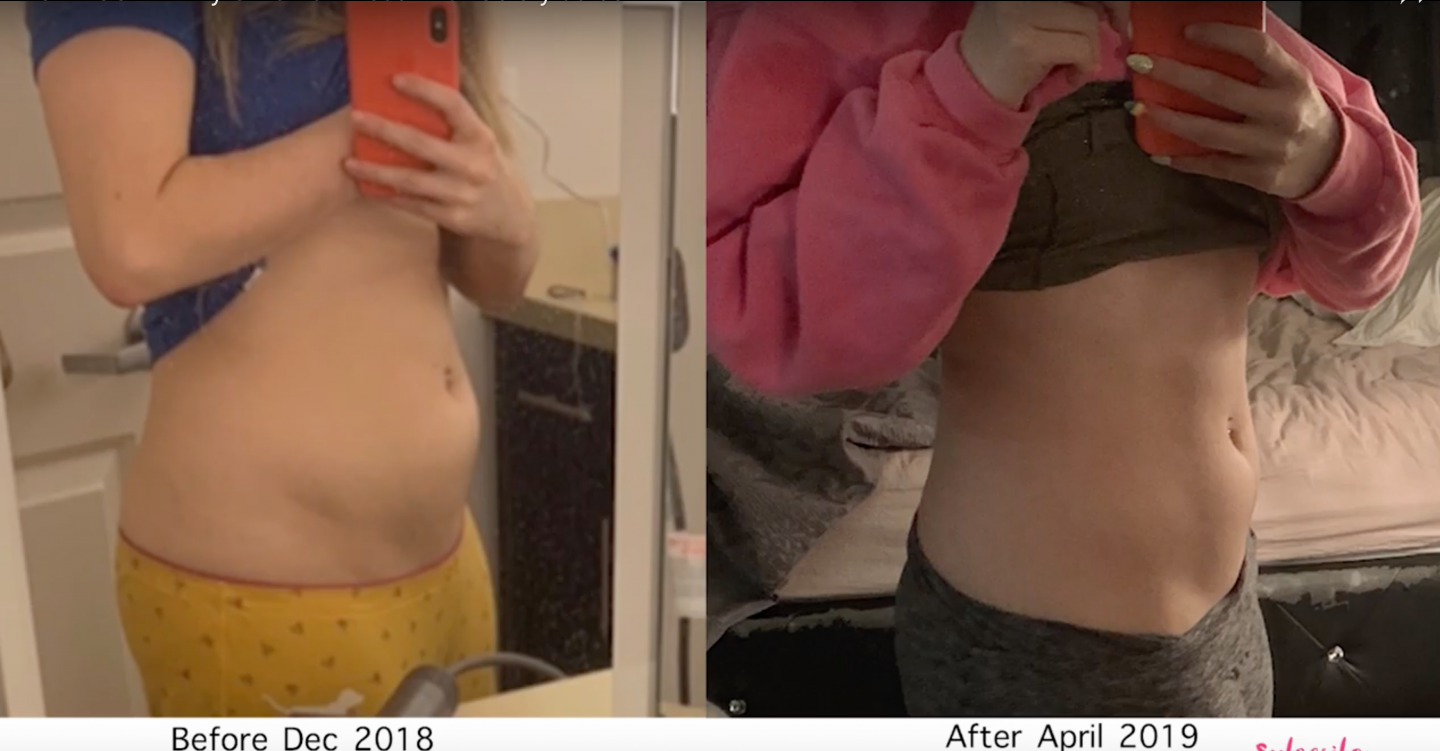 I didn’t have to take any medication at all cure it. All I did was stop everything, change my diet and tried natural remedies.

Who knows where I’d be if I continued the medications. I suspect  with full blown IBS & taking more medication for an auto immune disease that I didn’t need.

So why did my doctor tell me to continue to take the medicine when the FDA has proven that acid reflux medication can induce an autoimmune disease and requires this side to be listed on EVERY PPI medication bottle since 2016!?

I’ll tell you why.

Because even though this is substantially proven, according to the FDA, they don’t consider it an “adverse” side effect.

I don’t know what you think, but inducing an autoimmune disease is an adverse side effect! I felt like I was dying. I was bed ridden for nearly 5 months!  I couldn’t function anymore, I had no quality of life.

What I want you to take away from this, is not that doctors are bad. But question your doctors. I by no means want to promote stopping your medications. There are many people who have autoimmune diseases who need it to live. However I want to educate you and give hope.

If you research the cause of IBS & autoimmune diseases you will find that the cause is unknown. And there are many studies that show these illnesses are not formed within the body itself but by external factors.

Just like me. My external factors were a prescribed cream medication side-effect as IBS & acid reflux medication inducing an auto immune disease. But the doctors won’t tell you this.

So I encourage you. If you have a feeling that something is not right, trust it. Do research, fight with your doctors. Take action. You are your best advocate.

There is hope that you can heal yourself.

And that’s how my acid reflux medication gave me an auto immune disease.

Subscribe To Dose Of Bliss for more inspirational & wellness posts