I’m a believer in the law of attraction. Why? Because I’ve practiced it and seen the results myself before I even knew what it was.

I’ll never forget the day. I was seven years old and I saw the movie Good Burger with my parents. During the movie I had this weird feeling in the pit of my stomach and heart that I wasn’t supposed to be a part of the audience.

I instantly knew that I was supposed to know the celebrities in the movie.  But not as a fan, not as an actor, but somehow I would be on an even playing field and work with them.  Whatever that meant, I didn’t know yet. All I knew is, it just didn’t feel right sitting through a movie. The passion inside made me feel energetic and uncomfortable, like a fire where I had to get up and start showing the world my destiny.   In fact, from then on I couldn’t sit through anything like a musical, concert,  or speaker at school.

The strangest part was I always thought I’d grow up to be an artist & pet store owner (I was seven).  I’ve done art my entire life & loved animals. So the fact that I had this urge was interesting to me, it had never even crossed my mind before.

I had no idea what I was going to do or why I had that feeling.  I was only seven but I just knew that it was the universe telling me my purpose.

From then on I was determined to figure out a way to make that happen. I knew that someday it would be true. But what could I do at seven to get started now? And how would I make it to Hollywood being from a suburb of Chicago?

Here’s what I did. I knew I couldn’t be an audience member. So I signed up to go to an acting camp to do musicals every summer.  I even became a Jr. Luvabull for the Chicago Bulls.  I loved it! 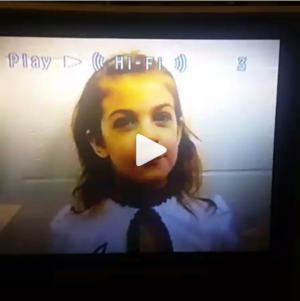 Check out this video from 1997 when I was a Jr. Luvabull for the Chicago Bulls! I’m being interviewed about not being scared to be on stage. I was keeping that promise to myself.

When there were speakers at school I would talk to them after the class and try to keep in touch with them. I even went to Slime Time Live at Universal Studios when I was nine and instead of asking how to get slimed I asked the producers how I could get a job there one day!

I would study about the successful people I loved. Every biography assignment, I would find some celebrity I admired like Lucille Ball and see how they became successful and overcame hardship. How they went through lots of rejection but listened to the voice inside, the same one I seemed to have. As soon as the internet came out, I would study entrepreneurs, find out what they did and think about it every day.  It consumed me.

Fast forward to college, I was studying interior design. At this point, I was still focused on my love of art and decided I was going to become an interior designer. But something didn’t feel right about it. I was good at it. I got all A’s but I still had that urge I had as a child in that movie theater. I had settled into being in the audience, I wasn’t following my purpose. But, while I had that feeling, I didn’t do anything about it. Until one day I presented a project to the class. Afterwards, my teacher pulled me aside and said, “You’re great at design, but when I see you speaking to the students, you light up. I think you should do a major where you talk to people.”

I agreed. But I didn’t know what major to choose. Design had become my identity. If not that, then who was  I? First, I thought maybe I’d do advertising. I talked to the advisors at the communications school but they told me my GPA was too high and I should apply to the journalism school.

And then it hit me. As a child, I couldn’t sit through those movies.  I had  recalled a forgotten memory from when I was nine.

I was watching MTV’s Say What Karaoke on TRL, specifically, my friend and I were swing dancing to someone singing Livin’ La Vida Loca by Ricky Martin. And then Carson Daly came on the microphone and I remember    thinking to myself I could totally host and do what he did. I thought, I’d love to do that one day.  But as soon as I thought about it, I talked myself out of it.

I thought you needed to have an agent to do that. I thought I could never achieve that. I thought I wasn’t the type of person good enough to be picked to do something like that.  Until this moment, I had put that idea in the back of my mind. It was a forgotten dream. So the moment my advisor brought up journalism, I realized that being a journalist could lead to being a host & reporter someday. I didn’t know you could go to school for that. Maybe you didn’t need an agent to get picked, maybe I had a chance.

Why not apply to the school and try? Up until now, I had never even tried to be a host so I for sure was not going to be one. Why had I been sitting on a dream all this time, when I knew I had this fire inside?

So the next day I applied and instantly got accepted into the Walter Cronkite School of Journalism and Mass Communications. I would be starting my junior year of college. I only had two years to figure out how I was going to become an entertainment reporter when the other students had four. I had no idea how I was going to catch up but I was determined to.

As soon as the first semester started, I hit the ground running. I went everywhere and met everyone to make sure I got internships and could catch up to the rest of the kids. I had always been the student that would get taken under wings by teachers but in journalism I didn’t have the time to make a name for myself. There were already a ton of star students who had way more experience than me.

By senior year, I had a few internships under my belt. I had gotten a job at the local TV Station Phoenix 11, Then started getting opportunities at ABC and even Kiss FM in Chicago.  But still  I had no leads for having a job out of college. Up until now everything had gone smoothly, but this time I didn’t have a mentor. I knew I wanted to go to LA but I didn’t know anyone. So what would I do?

I went to my advisor and asked for a mentor. Simple enough, right? He connected me to the executive producer of Extra (finally a real chance!)  A month later I went out to meet him in Los Angeles to ask for advice. I’d hint to him to give me an internship but he never did. He just said I’d have to move out there and things would come together. So, of course I did.

Another roadblock. Come on Law Of Attraction, where are you? I thought I had this fire inside? Why was no one helping me? I was working so hard.

Okay I guess, I would move to LA when I graduated and in the meantime I would do everything I could to make my goals inevitable.  So that year I started to think about what I did as a child that I wasn’t doing anymore. It dawned on me, I wasn’t researching the people I wanted to be like anymore. Maybe I should do that for inspiration.

During that time I stumbled upon the founder of Spanx Sarah Blakely giving a speech about writing down her goals as affirmations. I thought, if it worked for her, why not me? So every day for my entire senior year of college 2011-2012 I wrote daily affirmations.

Below are some of the things I wrote:

-I will move to LA to become an entertainment reporter

-I will go to every red carpet event by next year

-I will win an award in journalism

I remember thinking I don’t know how I am going to do it but somehow I will.

Yet graduation from college came and I had no job lined up. I was still going to move to LA anyways. Once I was there I’d figure it out.

When I made that decision everything magically came together. That Summer after graduating  I met someone at a bar whose sister happened to work as an entertainment reporter. That full story will be for another time. But long story short,  I asked to send her my resume and what do you know they hired me! Within three months from graduating college everything I wrote down came true!

I had moved to LA and became an entertainment reporter for InTouch & Life & Style Weekly. By the next year I had gone to every red carpet including The Oscars, Emmys & Grammys!

I had even won three awards in journalism for school projects that year. 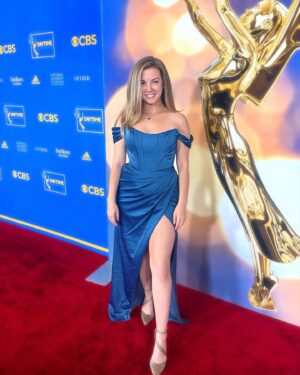 I couldn’t believe it, everything I wrote down came true. Everything I felt when I was seven watching Good Burger was real.

That fire inside has still never burnt out. I still feel most in alignment when I’m interviewing people, speaking to others and most definitely still can’t be a part of the audience. And that’s part of the reason I have this blog because I can’t stop that fire!

This blog reminds me to keep it going and to keep dreaming bigger dreams.

And when people ask me if I doubt myself,  I tell them all the time. I still am scared and think that I’m not good enough. I still talk myself out of the things I want the most.  But there is a difference between feeling that doubt and not doing something about it.  Because even though I may not think I’m good enough sometimes, I never once think that I won’t do it.  I never think that I can’t get better. I know that I can and will. They always say if your dreams don’t scare you, they aren’t big enough… right?

I’m sharing this because I want to tell you that it really works. If you really believe in yourself and keep trying you can do anything. If I’m proof that this works.  The Law Of Attraction is real.  Manifestation is real. That fire inside you is real.